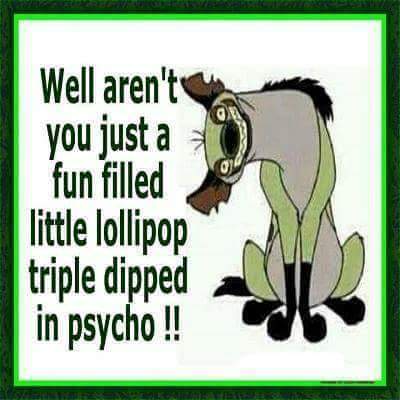 I would not bother reading anything here if I were you, it is a well established fact I am crazy

The world has gone crazy, but perhaps it’s because we have unprecedented access to information so it just appears that way. Indeed it may even be because of said access everyone has gone crazy. Newspapers, magazines, and all accessible information can neither be disbelieved or taken as gospel, which brings me nicely on to religion. Oh we’re not meant to discuss religion though, or politics, is the fact that we do now discuss such topics why we’ve all gone cuckoo? I am never quite sure which side of the fine line between genius and insanity I am walking, so far be it from me to judge where anyone else stands in the queue. Due to that hugely annoying phenomenon of free speech, and freedom of information, I too am hashtag just saying though innit.

Views are generally my own, but possibly belong to one of the voices in my head, ear, or may even be from one of my visual encounters of the screen kind. I do not endorse anything, not even my own thoughts, other than hate is never going to get any of us anywhere, violence is never the answer but sadly it is sometimes a temporary solution, and be kind to plastic bags as the poor things are hugely discriminated against now – we all have enough love in our hearts to spare a little for them. All names used are kept original, because let’s face it, if I am talking about something from my own boring little stratosphere, the chances of you knowing the person or persons, is highly unlikely to the tune of some mind blowing kind of number. If it’s something somebody else online has said, well then that’s rather self explanatory as to why I won’t change the name, but in order to quell all doubt they have already said it and put it out there, so there really is no need to change the names. In instances where I am using the words of a second party and am being the third wheel, I will use the name of the person who said whoever supposedly said what was said, as well as the supposed sayers name. This is just in case it’s not been said by the supposed sayer, and is a fictitious rambling from the mind of the person who rambled it before my good self. Then the sayer of stuff which was never said can be sued for slander and/or libel, by rights it would be libel as this is written,  but as I already mentioned the world has gone crazy and one must cover every base.

I cannot guarantee you will be entertained by anything here, and your warranty on being outraged, insulted, offended or anything else ran out yesterday. If I do happen to entertain even one person in the universe then mission accomplished, and my wall is extremely grateful your eyes had to hear this,  instead of it having to hear it from the horses mouth.

Above all else remember I AM CRAZY and I still suggest that you walk away while you still can, or more appropriately navigate away from this site.

*or possibly me trying to appear like an authorised writer of letters combined to make words,  which will mostly be from the UK version of the English language

You don't have to share, but you dont not have to either